If you are new, this is the time during the storm that is usually impossible to time out. The cold front is set up somewhere to the west of us. NOAA’s surface map data is typically 3hours old when it comes out, we don’t have our new doppler radar yet, and the best we can do is try to rely on surface observations to determine the frontal position. Wunderground is the best source because of its extensive network of private and public weather stations across the country. They employ an algorithm that draws its own surface map. It is not always 100% correct but I have found it to be more correct than WPC/NOAA. They are going to be going online with a new short term high-resolution model this year, word on the street is it is more accurate than any short term government model. Wunderground is owned by IBM.

Normally, I would now post a graphic of a surface map from Wunderground and talk about the wind changes behind the front and compare it to the latest NOAA map and speculate which is most correct. This time things are different.

In southeast Colorado, a closed area of low pressure is developing (cyclogenesis). Here is the latest surface map from NOAA just so you can see how the storm is developing. A bad way to describe what is happening right now is to compare it a black hole or perhaps a star consuming other stars. A poor analogy but I think it helps you understand what is happening.

I believe the trough to our west is much closer than where NOAA has it but that is not my point. There will be interaction as these two meet and it is difficult to determine how the whole thing will play out until they merge. The important factors include, how long will it take for them to merge (for our system to be eaten), the longer that process takes the longer the southwest flow will continue and the longer we will get snow. Also, what is the exact path that the new system will take as it exits to the northeast? Most of La Plata County does not do well with Northerly flow, Telluride does, as do areas north of Dolores and parts of Montezuma County. The counter-clockwise flow around the new storm should be strong enough to reach into Utah. It is one thing for wrap around moisture to make it over the divide in Colorado but this storm is going to be so big and strong the moisture flow will make it to Utah. This leads to multiple scenarios for snow to keep going in many areas today, generally favoring areas above 7,500 feet.

Yesterday I sent a little message to the NWS in my morning update about the snow saying the following.:“They also just might want to do one of those above 7,000 feet “Foothill Special” advisories for 6-12 inches with locally up to 18. Just in case they are reading they may want to consider that. (Nudge, nudge). If they were to do that they may want to start it at 6 pm Tuesday through 6 pm Wednesday. Just saying…”

On the Facebook page this morning we have had over 100 comments regarding snow totals with the heavier totals to the west where it started snowing earlier. There are a number of reports between 6-10 inches already, I would expect the folks to the east will catch up quickly throughout the day. Areas below 7,000 to 7,200 feet will struggle with accumulations until temperatures drop behind the front. Typically after that happens it shuts off the precipitation in our area, but as the storm to the east starts churning we could see periodic waves come through, similar to the “squalls” we saw a couple storms back. The heaviest snow will fall immediately before the front passes your location.

It’s going to be crazy to see the storm totals at Purgatory Telluride and Wolf Creek. I know for a fact the snow stake at Purgatory lags the actual totals by quite a bit, and it wouldn’t surprise me to see the stake completely buried today. Telluride is finally getting in on the action this morning they were reporting 2 1/2 inch per hour snow at 7 this morning. As best I can tell that happened when they changed to westerly flow, when the winds go north northwest things could get even deeper up there.

Keep the reports coming and drive safe if you are venturing out rurally. As I said you will know when the front come through. Here is where Wunderground thinks it is as of 9 am. 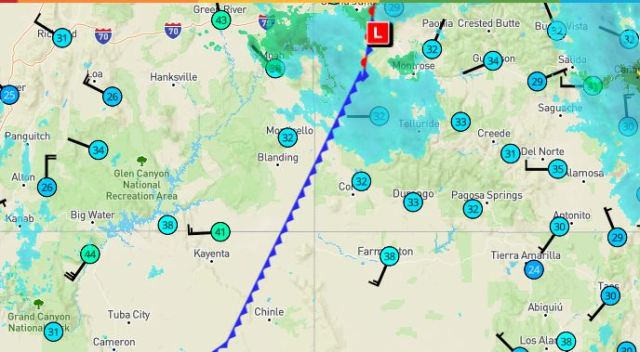 I think it may be slightly east of that location (closer to us).