Today has been more about overcast than showers, moisture has been slow to move in but a quick look at the colored water vapor imagery shows that moisture (green) is moving into the area.

The models have been pretty consistent in bringing the main push of rain and snow into the area between 6 am and noon tomorrow.

Here is the Euro prediction for precipitation type at 9 am Friday morning. Blue is snow, green is rain, the darker the shade the heavier the precip. 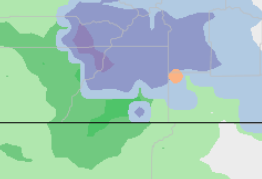 According to the GFS snow level are down to 8,000 feet and lower in the stronger cells.

At noon, you can see that the Euro thinks snow levels will drop further.

It will be interesting to see where the heaviest snow falls. Tomorrow morning I will post the morning HiRes short term model run so we can see what it thinks, it should be out by around 8:00 am.

There are still some discrepancies between the model on how much snow will fall not only with tomorrows storm but with the next storm, as well as its arrival time.

Most of the snow level guidance has been too high this spring. This storm has brought heavy snow to the Sierra which has had an incredible amount of snow this year. The snow levels is northern California were down to 5,000 feet, in Central California they were down to 6,500 feet, at 1 pm Mammoth Mountain was 23 degrees at 8,900 feet. Mammoth Mountain is expected to be open until July 7th this year, potentially later. Here is their snow report.

Regardless of how these two storms produce what an incredible winter for us. I have not talked about snowpack lately. Looking at the latest snowpack totals it is incredible most notably for Vallecito. 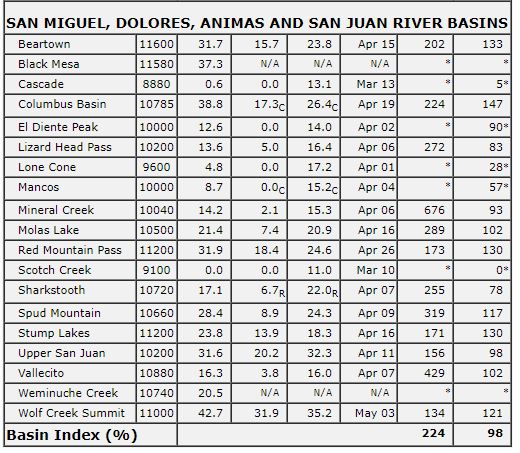 The normal median peak for Vallecito snotel is 16 inches of snow-water (liquid equivalent) and usually occurs April 7th. The average depth for May 16 is 3.8 inches SWE. As of last night, the current SWE is 16.3 inches!

Another way to put it, usually the peak amount of liquid precip to drain into the lake out of snowpack is 16 inches which usually is at peak on April 7th. Normally by May 15th, there are only 3.8 inches of liquid still to drain, this year there is still 16.3 inches (so far) ready to drain in. If you look at the chart there are many other exciting totals on there.

Tomorrow morning I will take a closer look at totals for this first storm.