Yesterday things came together better than anticipated. The ingredients were there, but the models were not, the models lost. Most of the totals were under 1/3 of an inch, I presume there were higher totals up north, but there were various internet and cellular outages there so I am not sure how reliable the totals are.

One thing is for sure, there is plenty of available moisture around, with much more headed this way this evening. By late this evening into early Sunday morning the precipitable water values (PWAT) will peak to highest levels that we have seen so far this year, precipitable water values (PWAT) don’t show you how much rain will fall, they show you how much rain potentially could fall over any given area if everything comes together. The models bring the heaviest rain in between midnight and mid-morning Sunday. That being said, this morning PWAT are higher than they were yesterday and they will gradually increase throughout the day and evening.

Below you can see the trough approaching for the west at noon on Friday. 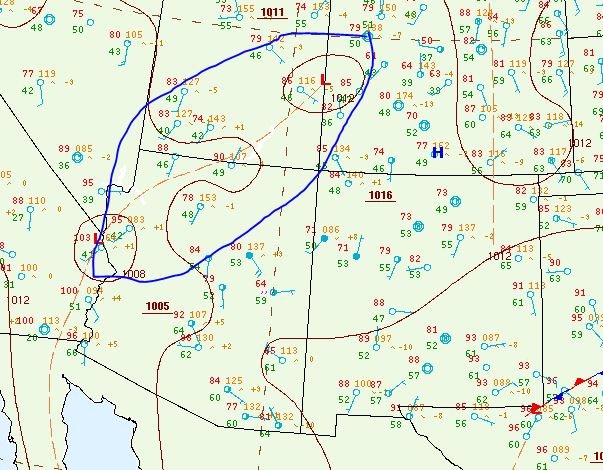 Next is a simple view of the Colored Water Vapor satellite image, the green areas below indicate the moisture that is supposed to be forced up into the area, the neon green in southern New Mexico is the most abundant moisture. 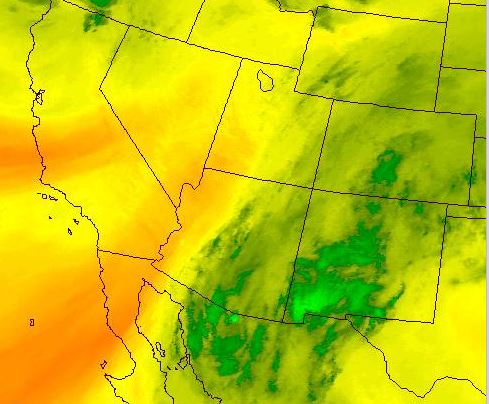 There is already a Flash Flood Watch due to the saturated grounds in and around the burn scar areas. The Watch is only issued until midnight, but keep in mind they will probably modify that or issue another one to cover between midnight and 5 pm on Sunday.

The National Weather Service in Grand Junction has issued a

* National Weather Service Meteorologists are forecasting heavy
rainfall over the 416 Fire burn scar, which may lead to flash
flooding and debris flows. In addition to the heavy rainfall
portions of the 416 burn scar received around one inch of rain
yesterday so the ground could be saturated in spots and
therefore it may increase the runoff.

* The potential for heavy rainfall over the 416 Wildfire burn scar
is of particular concern due to the threat of debris flows and
flash flooding. Residents near this wildfire burn scar and along
the Highway 550 corridor near Hermosa should prepare for
potential flooding impacts. Be sure to stay up to date with
information from local authorities.

Local emergency services are monitoring the situation and will
issue a public statement as conditions warrant. Plan now so you
will know what to do in an emergency. Keep informed by listening
to local radio and television for statements and possible
warnings. Follow the advice of public safety officials.

Could it still miss us? Of course, in that respect, it is no different than Winter. The best chance for a bust would be to the east channeling everything into Archuleta County, at the moment the models show the precip pretty evenly divided between the three border counties.

I will be watching this one for sure, expect more updates as this evolves.