The Monsoonal flow was well advertised. It arrived just when the models predicted and the precipitation amounts have been very close to what was predicted. Everything has gone pretty well, but as I mentioned a few days ago the monsoonal flow is going to take a break.

The ridge is going to pop back up and shut off the flow. I would expect some recycled moisture to hang out for a while leading to more isolated thunderstorms. We should see that downtick in activity beginning in the Wednesday/Thursday timeframe. Until then we will continue to see showers and thunderstorms, especially this afternoon and evening with scattered showers throughout the day on Tuesday.

The NWS released a Flood watch beginning at noon today.

THE NATIONAL WEATHER SERVICE IN GRAND JUNCTION HAS ISSUED A

* FROM NOON MDT TODAY THROUGH THIS EVENING

* SCATTERED TO NUMEROUS STORMS ARE EXPECTED AGAIN ACROSS MUCH OF
SOUTHWEST COLORADO THROUGH THIS EVENING. STORMS WILL BE CAPABLE OF
PRODUCING LOCALLY HEAVY RAINFALL WHICH, WHEN COMBINED WITH SLOW
STORM MOTION, WILL ENHANCE THE RISK OF LOCALIZED FLASH FLOODING.
RAINFALL AMOUNTS OF HALF AN INCH TO TWO INCHES IN A SHORT AMOUNT
OF TIME WILL EXACERBATE FLOODING CONCERNS IN THE WATCH AREA.

* FLASH FLOODING WILL BE POSSIBLE OVER THE BURN SCARS AND AREAS THAT
HAVE SEEN SATURATED SOILS DUE TO PREVIOUS HEAVY RAINS. THE GROUND
IN BURN SCAR AREAS IS UNSTABLE, SO DEBRIS FLOWS AND MUDSLIDES
COULD OCCUR IN AND AROUND THE BURN SCAR.

Here are the latest model runs showing their precipitation accumulation predictions for the next 24 hours (ending 8 am Tuesday). 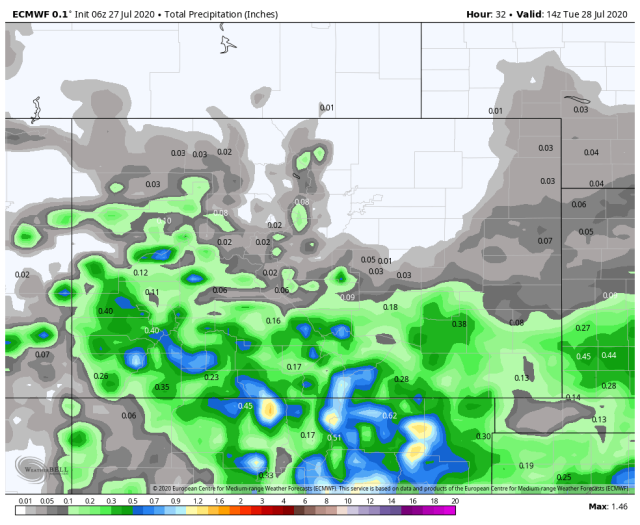 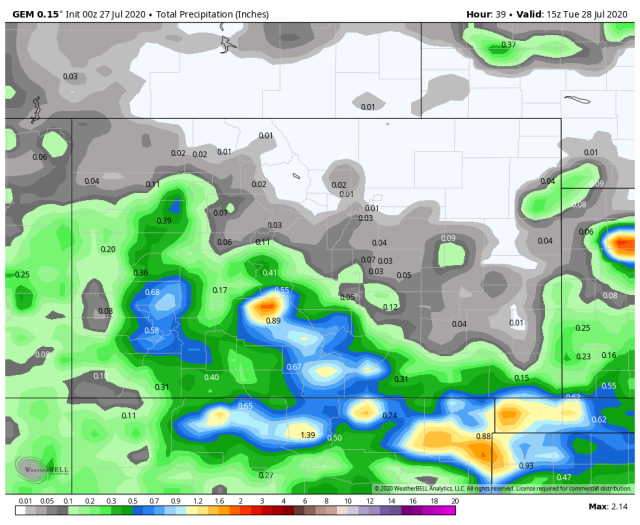 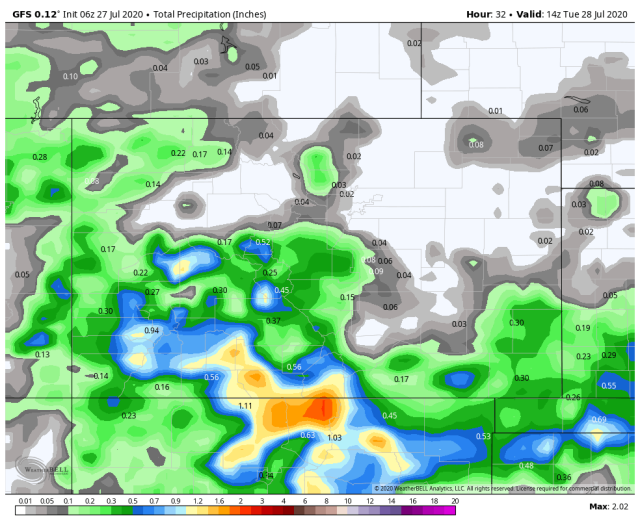 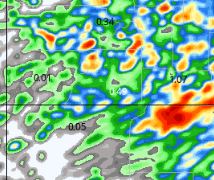 Thanks for all of the spotter reports, I may not be able to answer all of them but I read them all. Thanks for following and for supporting the pages.